My first week in Panajachel I met Maximón. He is the Maya god who survived the Conquest in the guise of the Catholic St.Simon (San Simón) or St.Jude Apostle (San Judas Tadeo) The kaqchiqueles mostly call Him Maximón. The kaqchiqueles of San Lucas Tolimán, however, like their tzutujil neighbors, refer to Him as Rilaj Mam. To the k’iche’s He is Aloc Mam or Mamximón. Sometimes people simply say Judas, Gran Abuelo, or Hermano Simón.

One starry night I entered before the altar of Maya priest Evaristo Rosales in Jucanyá (“the other side of the water”) sated by the strong scent of copal incense. Crepe streamers and adornments in pastel shades draped from the ceiling. Mums, gladiolas, roses, and the fragrant nardo lined and surrounded the altar. Images of saints crowded there: San Miguel Arcangel, San Antonio de Padua, San Judas Tadeo, Santo Domingo, Cristo Negro de Esquipulas, Santa Elena, even the Afro’Peruvian San Martín de Porras. The walls bulged with framed prints of the saints.

I`m not Catholic, nor religious, therefore at the time I did not know who or what was present in the room. To me there were only unrelated objects and sensations, enough however so that my head swam.Today I know a little more about the saints. I know their individual feast days and the towns throughout the area, of which they are the patrons. I attend their fairs, and I walk with them in the processions. Although,  I`m sure they`re aware I`m a non-believer, I think we`re at least on friendly terms.

Evaristo was the grandson of Antolín Can Churunel, a chamán of legendary powers who died at age 96. Evaristo defiantly defended the mixed and Catholic religions, native traje, and the Maya culture during his own brief lifetime. Like the saint who occupied the seat of honor at his altar, Evaristo was a controversial figure. He was both a great man and the occasional town drunk  Nevertheless, more than fifteen hundred friends, followers, and admirers walked with him to the cemetery.

Description of the Saint

San Simón was the only saint seated. He was also set apart from the other saints by his breezy attire and laid-back demeanor. He wore a Stetson cowboy hat, sport coat, vest, boots, and sunglasses and clenched his fist around the shaft of a bastón, or mando (ceremonial staff signifying great power). His skin was alabaster, with a blush upon the cheek; his moustache, meticulously-maintained; a cigarette dangled from the corner of his lips. Tucked between his fingers were U.S. bills and Euro and Quetzal notes of various denominations. Offerings from admirers lay at his feet: quartz crystals, pre-Columbian pottery shards and figurines, mangos, papayas, apples, cigarettes, soda pop, beer, and every class of liquor. I could tell at once he was special, very cool, a real dandy.

Maximón practices white magic, mostly. Therefore, visitors ask for help in business or with their corn yield. They implore his intervention with the weather.They entreat Him to mend broken relationships or to find them new love. Likewise, worshipers ask Maximón for good health and to be independent of drugs or alcohol. Maximón is a very personal god (a running-buddy of sorts). Therefore, they not only beg his assistance, kiss his hand or cheek, and say endearing things to Him. They curse Him, chastise Him, and spit on the ground before Him.They do so with reason.

You, see, He´s not exactly perfect. As the Maya god most closely associated with humans, He has human failings. He`s a womanizer (although He´s also the protector of women), often drinks too much, and routinely indulges his friends and followers to excess. He also parlays black magic at times.

Mindful of this, I had minded my manners and did not arrive empty-handed. It´s always best to pay respect. Reaching into my bag, I offered San Simón the bottle of rum (Venado) within. Evaristo congratulated me that it was his favorite brand, showed him the bottle, opened it, then spilled liquor out on the ground in the doorway of the room, in its four corners, and in a straight line before the Saint. Candle flames darted and jetted about the room (a space no larger than 10´x 15´), licking and lapping at San Simón (who was beaming cordially now) and casting eerie shadows on the walls and ceiling.

Maximón is a social character. Therefore, He hates to drink alone. Seated on the long cofradía bench by the doorway,drinking in the many sensations and a little Venado myself, I became intoxicated, over-stimulated, and, despite myself, began to feel the force of the place. I therefore thanked them, bid them goodnight, and stumbled out into a star-lit night sparkling more brightly than before. Looking back to the altar over my shoulder, I saw Maximón grinning at me around the corner of the open doorway.

Thoughts on the Mixed Religion

Staggering away down the Callejón Chotzité, I muddled thoughts about Brazilian novelist Jorge Amado`s playful treatment of the condomble religion of his country, and about the Santería movement of Cuba. The magic created by these dialectical fusions of America, Africa, and Iberia had been similarly recreated for me this evening with a slightly different tinge. Since that night, I have considered Maximón a fast friend, and have visited Him in altars, humble and grand, throughout the highlands and Pacific Coastal plain. Sometimes I bring the Abuelo food or liquor; sometimes, clothing items or accessories. However, I have been told by several Maya priests that He really likes my gifts, and for that I feel strangely proud.

My first years in Guatemala, I celebrated the feast day of Maximón, October 28th, in Evaristo’s house. Since 2013, however, I have spent the fiesta of Aloc Mam each year in the home of Vilma Poz of Zunil, Quetzaltenango. Here Maya priests from throughout the four cardinal points of Guatemala gather for a simple Maya ceremony. However, the fiesta is atypical in that Aloc Mam is the only one under the influence. There is no open drinking among the guests. The fiesta is a celebration of Aloc Mam, Maya cosmology, and brotherhood. 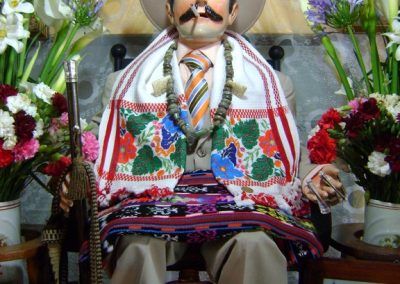 My first visit to Maximón in Panajachel, although not my last.

Various images of Maximón, Oct. 28th in Panajachel However, the frames on the wall display Judas Tadeo (Jude Apostle). 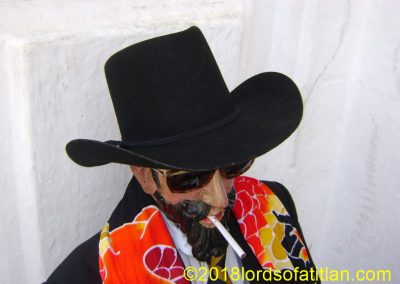 Maximón on Thursday of Holy Week, in Concepción doesn’t look holy. However, He looks very cool. 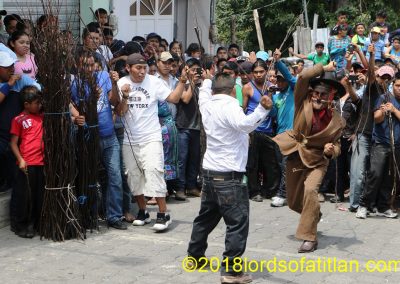 El Shutío, where the men of San Andrés Semetabaj battle with Judas. However, in this case, he is Judas Iscariot . Furthermore, this is his repentance for his betrayal of Christ. Thus, every Saturday of Holy Week he takes and gives a beating.

The fiesta of Aloc Mam or Mamximón (Maximón), the names the k’iche’s call him. Here he boasts the traje of Zunil. 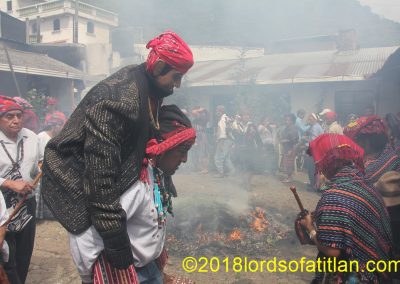 Aloc Mam dances with Roberto Poz in his fiesta in Zunil., nevertheless he dons clothing from Sololá. 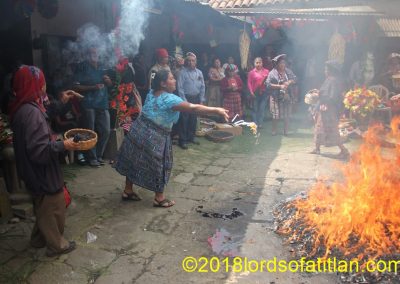 Pure magic in the fiesta of Aloc Mam, Zunil 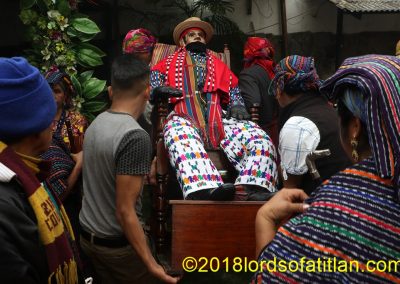 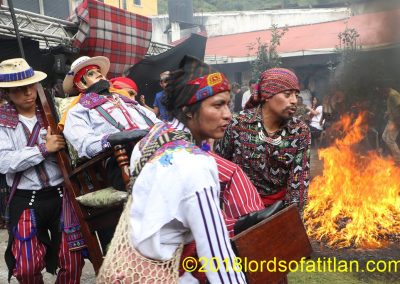 Aloc Mam dressed in outfit of Todos Santos Cuchumatán.but the fiesta is in Zunil.