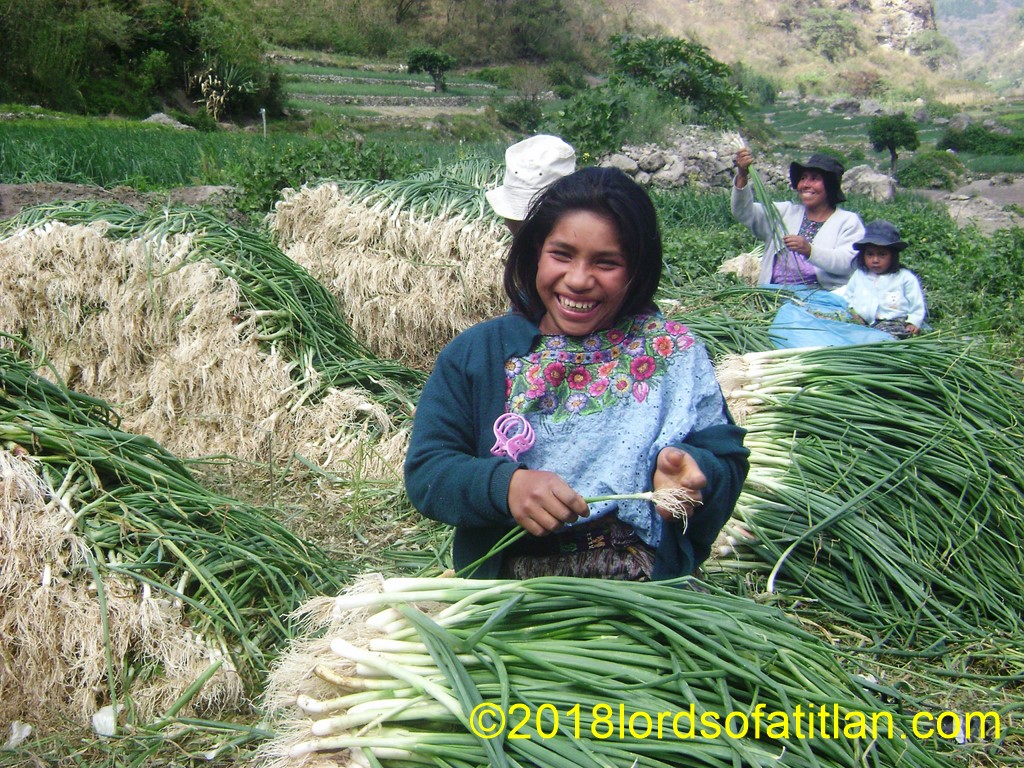 My first love in Guatemala was onions. As a tourist to Xela in my first days in the country, I walked up above Zunil to the hot springs Fuentes Georginas. En route, I passed the most beautiful and intensively-worked farm fields I had ever seen. A world of activity unfolded before my eyes. Men cultivated corn, potatoes, and tomatoes with large hoes (azadones). Women and children cleared weeds from the vegetables with long sticks. Entire families moved in unison. Some gathered young onion shoots into bundles. Meanwhile, others planted the newborn shoots. Some prepared the fertile volcanic soil for planting. Still others harvested, washed, and arranged the opulent produce for presentation in the public market. I therefore recalled Bernal Díaz`s words as he looked down on the Valley of Mexico for the first time in 1519. Diaz spoke of “things never before seen nor seldom ever dreamed of.”

Nevertheless, as the roadway spiraled higher and higher, I continued to meet more spectacular views at every turn. Small terraced garden plots over-spilled with vegetables. Shaped to the contours of the terrain, these plots climbed the mountain slopes through the fog and clouds to the hot springs. The landscape was a patchwork of green in every imaginable shade. Above all,the strangely-sweet scent of onions permeated the air.

Coffee groves (cafetales) and the highly-profitable Hass variety of avocado dominate around much of Lake Atitlán. Corn, potatoes, and pole beans proliferate at the higher altitudes. Where there is ample sunshine and year-round water, however, the crop of choice is onions. Onions are a cash crop requiring intensive labor. Onion production is continuous, almost without season. Stacked in piles, braided and bunched, onions and their stems are a glorious sight. Added to that, onions are harvested and washed in landscapes of nearly incomparable beauty.

Below Barrio San Bartolo in Sololá are a breath-taking series of onion terraces that tumble to the Jaibal River. Driving from Sololá along what was once the Camino Real (Royal Road) through Aldea Sacsiguan one passes hundreds of onion fields. Likewise, rounding the bend above Tierra Linda the view across the canyon carved out over the millenia by the San Francisco River is fantastic..There lie Lake Atitlán, the Volcanoes Tolimán and Atitlán, the valley, mountainsides, several towns, and countless corn and onion fields.

Dropping from above the canyon wall windingn down into Concepción (Quechelá) is like entering Brigadoon. Quechelá, in many ways, is a land frozen in time, with social relations and religious beliefs at times predating the Conquest. In many towns, the ceremonial kiss of the hand is limited to religious processions and certain activities of the cofradía. In other towns, however, it no longer exists at all. ,in Concepción, though, farmers assembling in the morning for work in the fields kiss each others` hands as a sign of respect. Likewise, the owner of a store and her customer kiss hands over the purchase of a Coca-Cola.

Also, n Concepción, Maya priests (chamanes) consult Maximón, to determine the optimum time to plant. Farmers still utter small prayers as they drop their seeds into the soil. In February, there are ceremonies to bless the seeds. Likewise, in November,there are offerings to the Ajaw (the Creator and Former of the Universe) thanking Him for the harvest..

Concepción was once an important town on the road to Mexico. Its church was built in 1621 and is one of the lake`s oldest and by far its prettiest.The church is a real jewel, jam-packed with paintings, furniture, religious relics and adornments, silver chalises and custodias (ceremonial staffs), and images of the saints, all from the early 17th through 18th centuries; this, despite major thefts by gringo tourists. Quechelá means “between the mountains”. On one side, Concepción is bordered by limestone cliffs rising above slopes laden with corn. On the other, huge bluffs brimming with onions roll gently to the canyon, and then fall. Sometimes standing in the onion fields is like being on the edge of the earth or floating in air.

Panajachel, now a busy tourist center, is somewhat a modern mess, with too many moto-taxis, motor scooters, shops, vendors, restaurants, and churches. Once, though, it was a quiet town of fishermen and simple onion farmers. Onion beds still border the river and ascend in terraces up the mountain slopes to Tierra Linda on one canyon wall and San Andrés Semetabaj on the other. Today, little of the work is done by townspeople. For the most part, those who plant and harvest onions in Panajachel wear the traje of Sololá, and come from Peña Blanca, Buena Vista, and, most often, Tierra Linda.

On October 4th and 5th 2005, flooding, tumbling boulders, and mud-slides in the wake of Hurricane Stan all but obliterated the onion fields of Panajachel and the pathways down from Tierra Linda and San Andrés. Working with ant-like tenacity, the people of Tierra Linda then fixed the trails and restored the onion fields to something beyond their former glory.

Once again the destruction and rebuilding process revisited the onion fields with tropical storm Agatha (May 29th, 2010) and its aftermath. 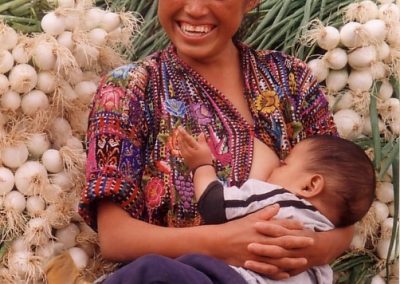 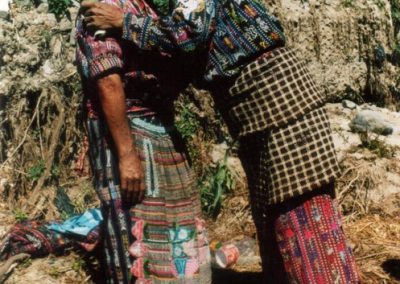 Often Maya are ashamed to show affection in public, but not this pair from Tierra Linda, Aldea Sacsiguán, Sololá in Panajachel. 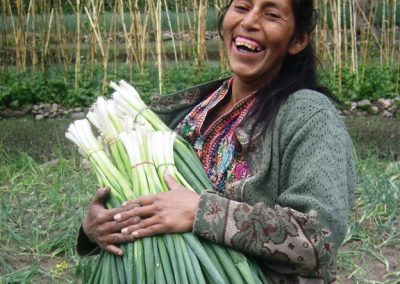 Woman from Tierra Linda, Aldea Sacsiguan shows, while the work may be grueling, a little fun can be had as well. 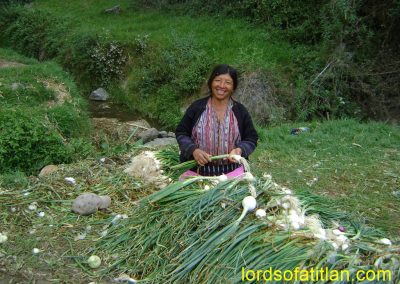 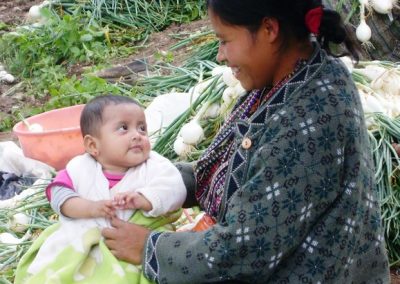 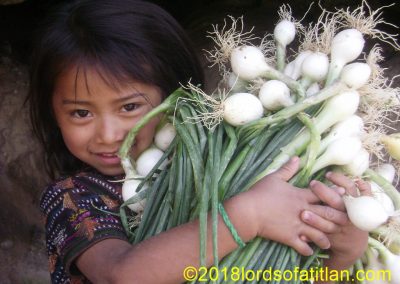 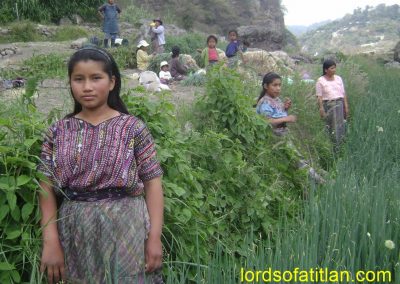 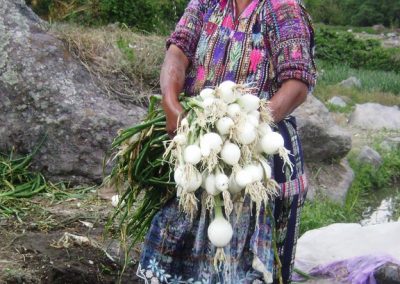 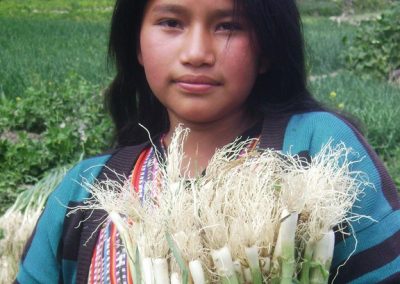 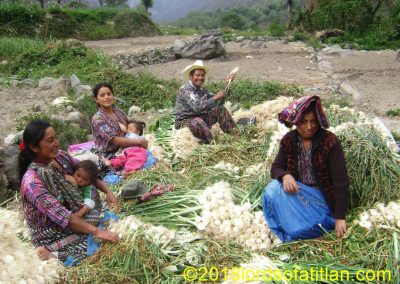