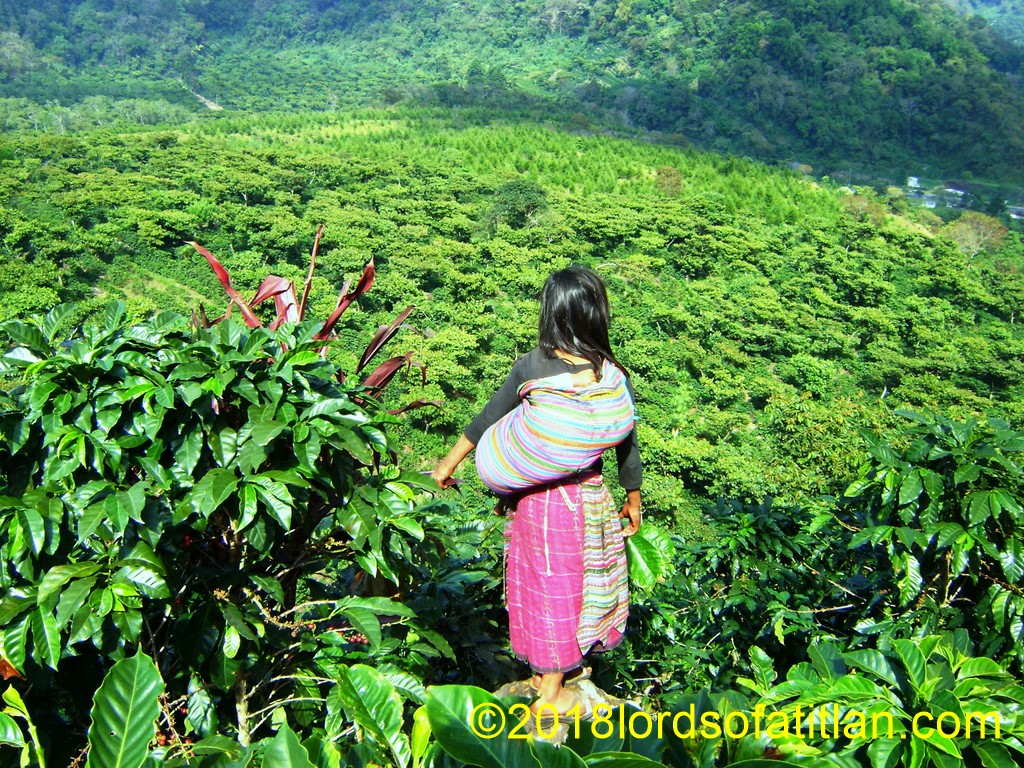 Drive between Santiago Atitlán and San Lucas Tolimán some late April morning, coursing through rolling hills covered with coffee in bloom. Then you will start to understand why the workers love the coffee harvest so.Tiny white-star clusters shower the waxy emerald green leaves, as splashes of yellow sunlight filter through the grabilea and other shade trees above. Stand at the upper reaches of finca Pampojilá in late December. Look down its straight rows of coffee trees bursting with red fruit to the beneficio (processing floor) below. Turn back toward the magnificent cerros Iquitíu and la Recompensa. Everywhere there is coffee. Finally, climb Iquitíu and look down at the coffee coating the fantastic fairyland hills mushrooming up around San Gabriel and el Naranjo. Then you will know why the workers love the coffee harvest so.

My experiences with the coffee harvest were in the finca Pampojilá, San Lucas Tolimán, in the days before Tropical Storm Agatha (May 29th, 2010). However, Agatha changed the face of the finca forever.

Pampojilá had no migrant workers, Therefore, Pampojilá lacked the international flavor of the coffee harvest of many fincas. For instance, fincas such as Santa Teresa and Santo Tomás Perdido near the Boca Costa employ migrant workers from all of the poorest parts of Guatemala. Therefore, these fincas are alive with colorful native dress from many parts of El Quiché, Huehuetenango, Sololá, and elsewhere. Likewise, many Maya idioms proliferate within these fincas.

No one commuted far to finca Pampojilá. They came from nearby communities of San Lucas. Many workers moved away from the finca after Hurricane Stan in October 2005 due to the destruction of their homes. These workers  came from the new colonia built with the help of the Parish of San Lucas Tolimán, Colonia San Andrés. All were born Luqueños ( people of San Lucas). However, they shared common descent from San Andrés Semetabaj, the birthplace of the original Pampojilá owner, Manuel Díaz..

Among the harvestors were real characters and personalities, women of awesome beauty and fearsome strength, and inter-familial connections spanning generations. Whole families from infancy to old age participated in the harvest. Small children carried smaller children in perrajes (rebozos) or towels on their backs. Mother picked the upper branches, while kids searched the middle branches and toddlers combed the bottom. Grandma knelt in front of her canastas (baskets) selecting out the green, red, yellow, and dried-out brown fruits one from the other.

Old women strolled together beside moss-covered stone walls beneath the towering eucalyptus trees which lined the ancient roadways.They lolled the time away while balancing 70-80 pound sacks of coffee on their heads. Younger women bearing far greater loads on their backs raced past them.The work was exhausting, sticky, and strenuous; however, the mood, pure joy and celebration.

When I first entered through the monumental front gate of Pampojilá, stepped onto its thick stone main-street, and passed its elegant public pila (comunal wash basin), I was struck by the beauty and history of the place. However, walking along the rows of dilapidated shacks lining the road and pila, I also sensed something of its misery. Standing among the ruins of these mostly abandoned habitations I reflected upon the adaptive capacities of man. Therefore, I imagined that some fun was also had here, some good fun, and probably continued still.

Those who arrived from San Lucas and surrounding colonias to pick coffee each morning knew more about that than I did. Many traced their ancestry to one or more of these broken-down shanties.They therefore shared memories of deceased co-workers and common ancestors, whose presence they could feel working alongside them in the cafetal. They still imagined their grandmother at the pila washing clothing, or Grandpa straining down a mountain trail with coffee on his back.

The old woman selecting coffee beans on the ground was once nursed in the cafetal. She was once the little girl picking berries from the bottom branches. Her memories of other old ladies selecting coffee, as she now knelt doing, somehow had kept her eternally young. Hence the true appeal of Pampojilá’s coffee harvest was that it provided a sense of family, community, and history to the workers. Thus it connected them in a living way to generations past.

May 29th, 2010 changed Pampojilá forever. Mud-slides roared down Volcán Atitlán. Heavy currents raced down historic lava flows opening a deep gorge below the highway. The current swept away a vehicle bearing the storm´s first two victims. Rocks, mud, and a wall of water raged at the finca. Tumbling boulders took out the elegant pila. Mud buried the finca´s church, dedicated to St. Joseph (San José). Mud and rocks likewise destroyed most of the finca’s remaining homes. However,the interment of an old couple, as they slept, embracing, was the greatest  tragedy of all. I watched in horror on May 30th as men removed their bodies.

From behind the finca, a huge mud-slide oozed down Santa Monica and deposited its heavy load. It killed all of the coffee trees in its path. Mud and boulders destroyed the finca´s Big House, home of owner Oscar Díaz´s great-grandfather Manuel.

Oscar, melancholy from his losses, sold the finca to Pantaleón, a huge sugar processing plant near Santa Lucia Cotzumalguapa, Escuintla. Life on the finca changed. The work became more regimented .Therefore, small children and seniors could no longer accompany their families. Previously, workers arrived for Pampojilá´s coffee harvest in family groups at the hour which accomodated their busy lives.  The workers dedicated their lives and labor to the finca for generations. However, now they are not welcome there; nor am I.

Shortly after Tropical Storm Agatha I made a video slide-show for Oscar Díaz. The video shows both the coffee harvest before Agatha and the destructive force which the torment visited upon the finca. When Oscar and his wife watched it, they wept.

I have published Oscar’s video on Youtube with a link to this site. Have a look. 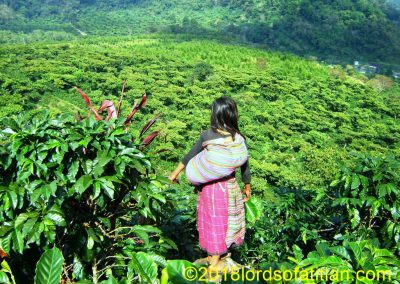 View from Caledonia below to the Finca Pampojilá, San Lucas Tolimán. However,Tropical Storm Agatha scarred this view for the long-term. 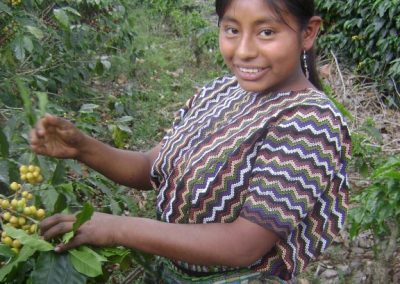 Wendy cutting coffee in the Finca Pampojilá, but before the Torment Agatha. However, we call the yellow variety she picks Nancy for its resemblance to the fruit of that name. 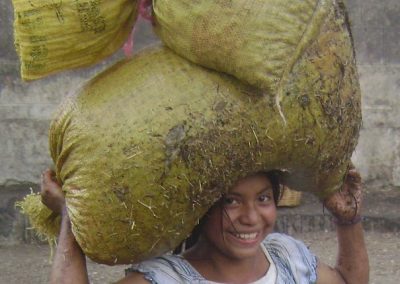 This girl carries two gunny-sacks of coffee but still smiles in the Finca Pampojilá. 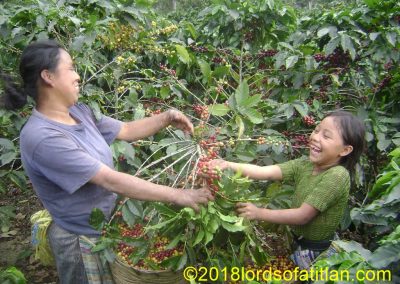 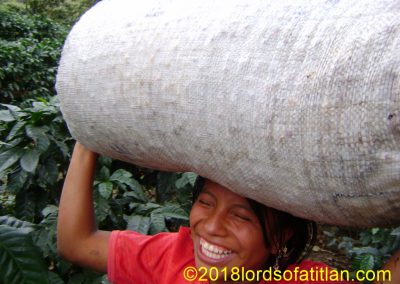 She has 140 pounds on her head but smiles in the coffee harvest of Pampojilá. 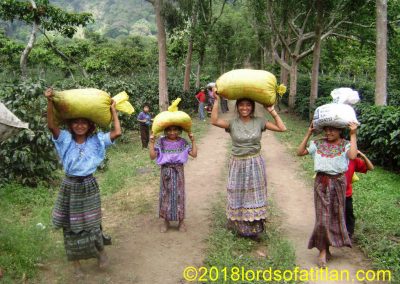 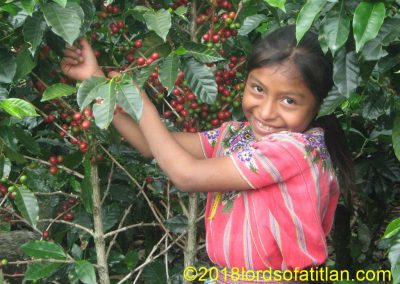 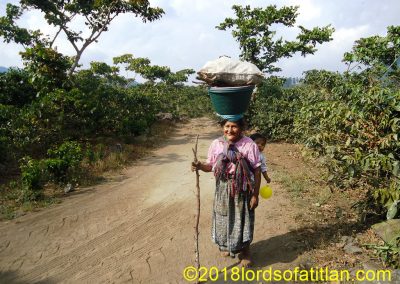 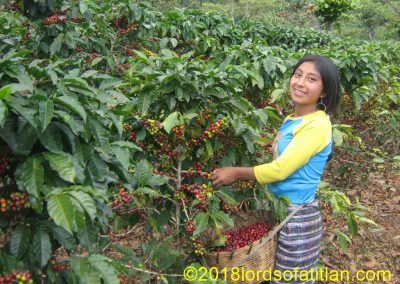 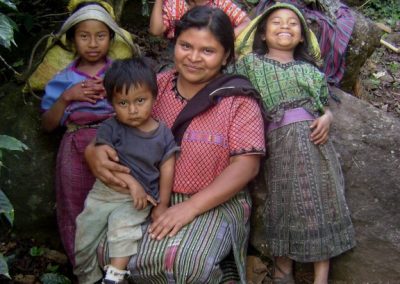 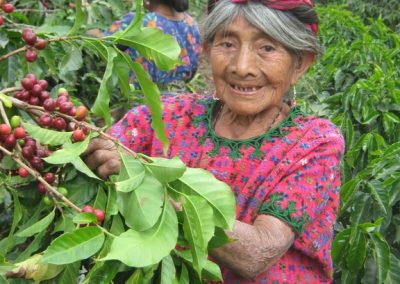 Juana Choac picking coffee in the Finca Pampojilá, but Juana is now deceased. 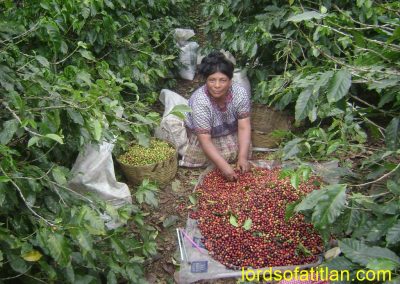 Juana´s daughter Mari Luz carries on with the work in the Finca Pampojilá. 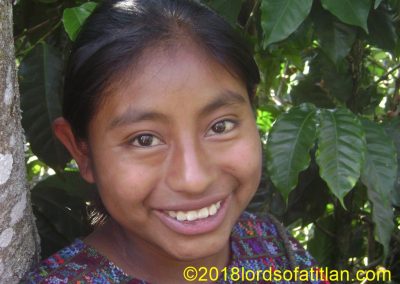 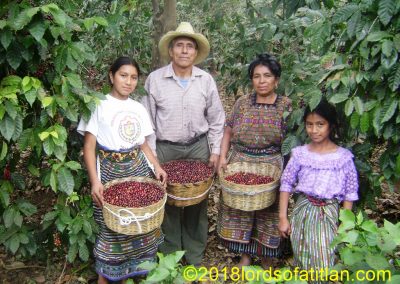 This family is from Colonia Pampojilá but picks coffee on their own terrain in in San Martín, San Lucas Tolimán