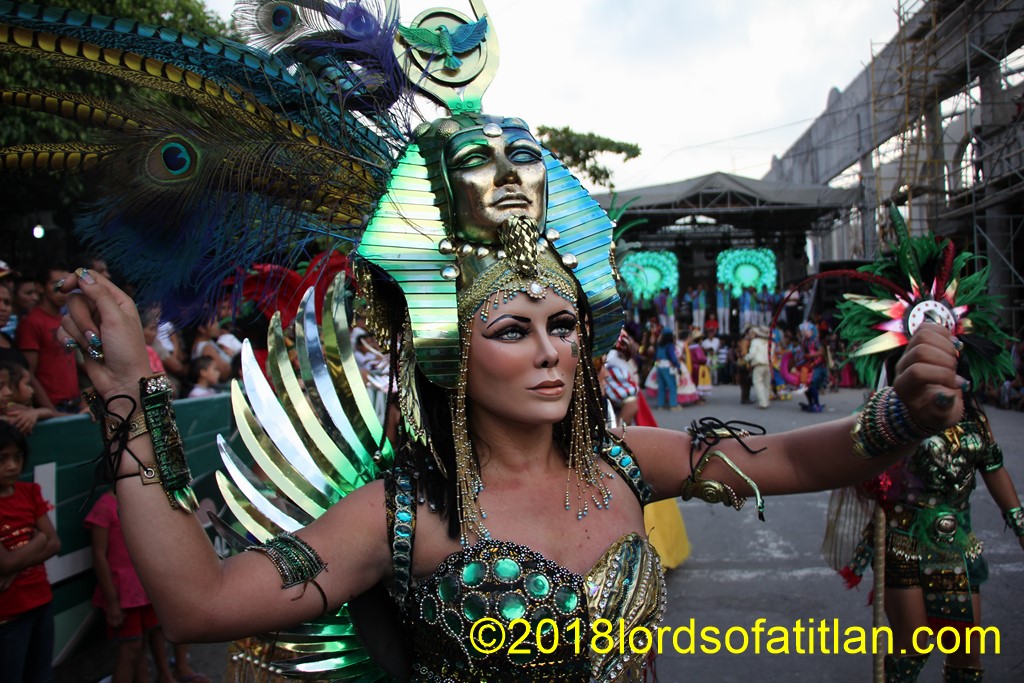 Although customs vary region to region,ceremonial life at the Southern Coast is every bit as traditional as it is in the highlands. For one thing, both regions celebrate the same saints on the same days.. Both are tied to the Catholic calendar. Secondly, while Catholic celebrations in the highlands have lower turn-out each year, ceremonial life at the Coast continues as before. Religious processions and celebrations, activities of the religious brotherhoods (cofradias), and Maya ceremonies are an integral part of coastal life.

In both regions, the seasonal round of festivals and religious fairs is relentless. It never ends. In addition, many towns celebrate their saint on his feast day and then again a week later. Likewise, all towns celebrate Holy Week and Christmas Eve. Many towns also honor a second, minor saint. Also, no matter who is the patron saint, in every town there are cofradias dedicated to other saints. These saints too have their religious festivals.

Despite similarities between regions, there is one coastal religious festival that has no counterpart in the highlands: Carnaval Mazateco. This is a celebration of Fat Tuesday, the beginning of Lent. Mazate’s Carnaval imitates larger, more famous celebrations such as our Mardi Gras, or Carnaval in Rio de Janeiro. In Guatemala, however, Mazate’s version of Carnaval is unmatched. In other towns of the Republic, that day, school children fill egg shells with confetti and powder and bust them over people’s heads. At times, for fun, they use plain eggs.

The desfile (parade) starts off with the departmental indigenous queen in the lead. She is the Nim Ali Xochiltepec, crowned  in an election in Mazatenango a few days earlier. However, next come the departmental  beauty queens adorned in lavish, yet skimpy outfits, which appear the work of Hollywood designers. What really identifies Carnaval Mazateco, however, are groups of scantily-clad spokes-models gyrating to rythyms a little less sophisticated than those of New Orleans or Rio, I’m afraid.

What predominates in Carnaval are groups of school children parading. Some wear uniforms. Others dress in Maya fashion or as Xinka or Garifuna, the other two indigenous groups within Guatemala. Still others copy the spokes-models. These children come from throughout the Southern Coast to participate. At a point by the main arch in the parade route, people squirt a lot of water. Some actually use hoses. Therefore, it’s risky for cameras.

Carnaval once enthralled me. I now stay away, but not so much for the risk to my camera. It’s that today I devote myself more to cultural activities, and avoid the prurient appeal of Carnaval. I consider too that school parades threaten the Maya culture by indoctrinating children to abandon their cultural identity. But, I’ve got to admit, Carnaval Mazateco is fun. 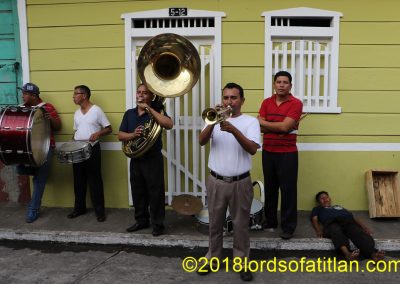 Normally I don´¡t shoot photographs without permission and therefre do no shoot street drunks. However, in this case with the town band of San Sebastián Retalhuleu, January 16th, I couldn´t resist, 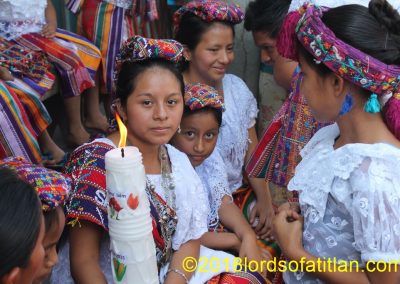 This is a former indigenous queen of San Sebastián, who, however, was not able to complete her cargo. Her mother forced her to go to Miami with her to paint houses. 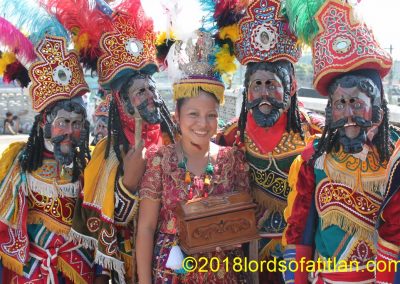 This is the indigenous side of the Dance of the Conquest in the Fair of San Sebastián. Although indigenous, the woman in the middle is the Malinche, the Marina who accompanied Cortéz in Mexico. She therefore supports the Spaniards and her name is synonymous with treachery. 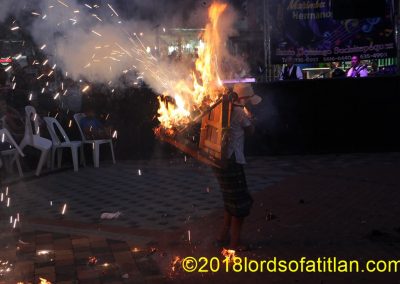 Pyrotechnic dance in the Fair of the Virgin of Candelaria, Feb. 2nd in San Lorenzo, Suchitepéquez. However, the dancer is from San Bernardino. 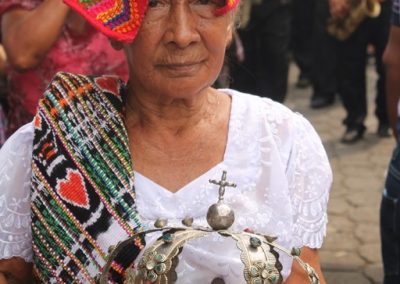 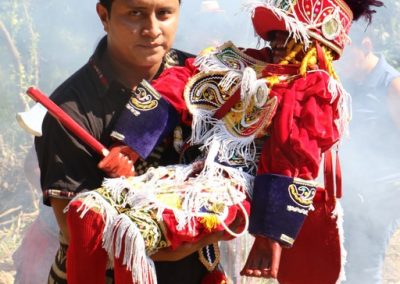 This is the Maya ceremony in the Fiesta of the Gran Iquís, Feb. 3rd in San Bernardino, Suchitepéquez. He is a character in the Dance of the Conquest, but to the kaqchiqueles he is known as brujo, shaman. or red. 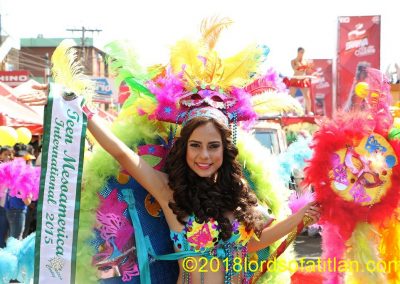 The celebration for Carnaval Mazateco, Fat Tuesday in Mazatenango is imitation Rio do Janeiro, but it´s a good imitation. 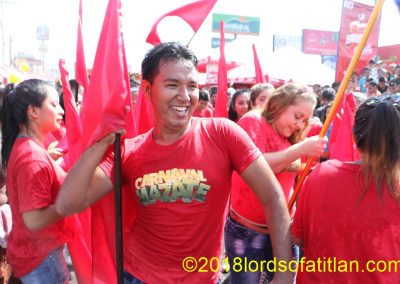 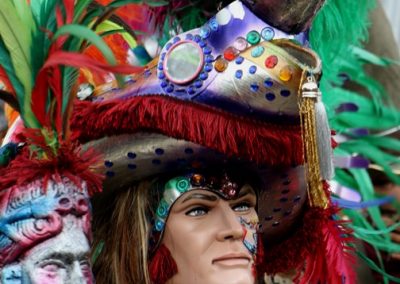 Normally I don’t like the Dance of the Convites, or dance of the disguises. However, en Samayac third Friday of Lent the outfits are incredible.. For example, look at thgis representation of Captain John Smith. 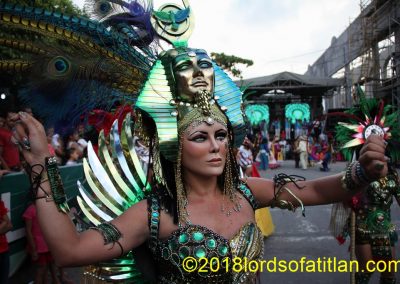 Or check out this Cleopatra also in Samayac on third Friday of Lent. 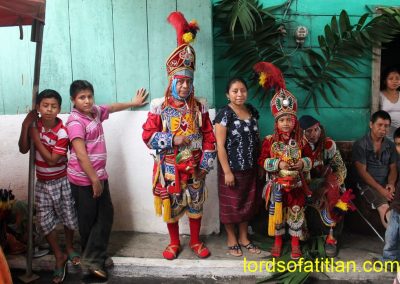 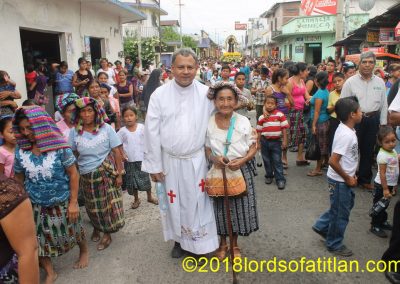 Although Doña Isabela attends fairs all over the Coast and highlands, this memory with her own priest in the Fair of San Antonio Suchitepéquez, June 13th, has to be one of her fondest. 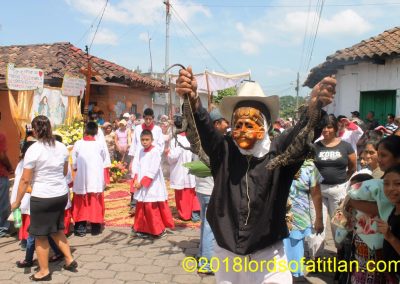 A number of odd personages accompany the procession of Corpus Cristi (Body of Christ) in San Bernardino. For example: the iguana salesman. 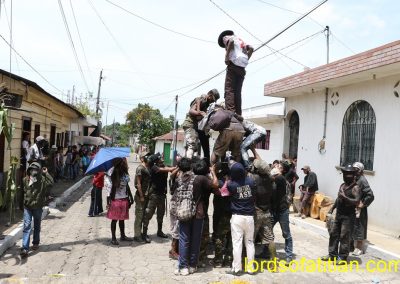 They say there’s nothing racist about Los Shapos in Corpus Cristi,, San Bernardino, but I disagree. 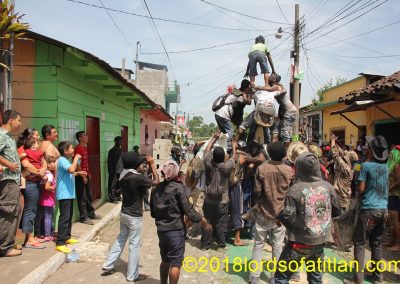 Despite the clear racism of Los Shapos, their goofy antics are fun to watch. However, there is great danger when the pyramid collapses and the Shapos fall to the cement. 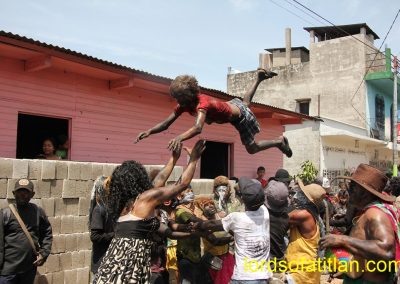 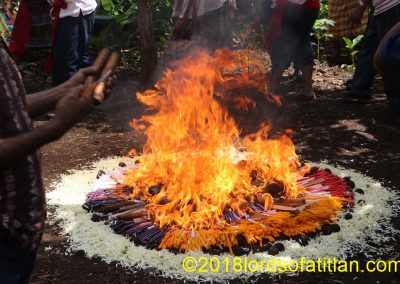 This is the Fiesta of Aloc Mam (Mamximón) in San Bernardino. However, here it is celebrated one week early on the 21st of October. 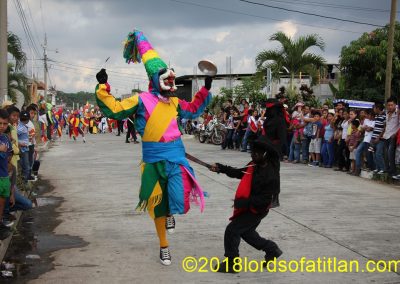 This is El Shutillo Samayac-style in the Fair of the Virgin of Concepción, Dec. 8th. Here, however, the men do not battle with Jude Iscariot as they do in San Andrés Semetabaj. In contrast, they simply flog him as he passes.